Verre églomisé, from the French term meaning glass gilded, is a process in which the back side of glass is gilded with gold or metal leaf.
It is pronounced- (ver ay ay   glowm ee say)
The technique dates back to the pre-Roman eras,
but its name is derived from 18th century French decorator and art-dealer
Jean-Baptise Glomy(1711–1786) who is responsible for its re-popularization.
One of the key historical periods of the art was in Italy during the 13th to 16th centuries. used is described  It has also been used throughout Europe since the 15th century, appearing in paintings, furniture, drinking glasses and similar vessels and jewelry. It is also often seen in the form of decorative panels of mirrors, clock faces, and in more recent history, as window signs and advertising mirrors. 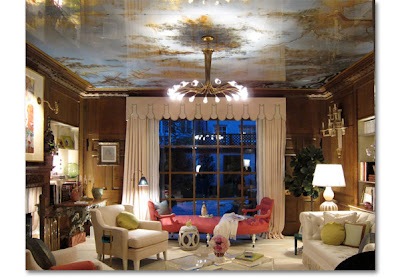 
I think this ceiling is absolutely STUNNING!
Click to see more of Miriam’s works of art- www.miriamellner.com