Sunburst Mirrors Were Everywhere At Market

Mirror mirror on the wall….who’s the greatest blogger of them all? 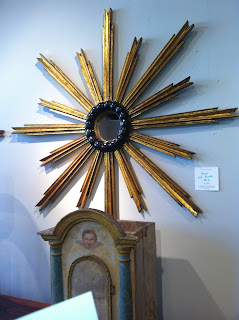 This week at High Point Furniture Market we saw Sunburst Mirrors  EVERYWHERE!
AND each one was as pretty and as interesting as the next.  They literally can be used in any
application. 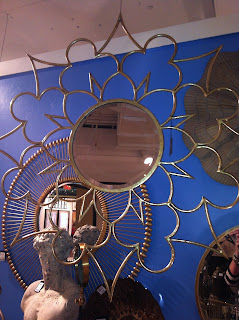 The origins of the starburst mirror are a bit unclear.  It is suggested that the style was first made popular by King Louis XIV of France.  Others say that the mirrors came about because antique dealers and collectors repurposed the frames -taking  the round portraits and images of the Holy Family and saints from the round frames and replacing them with mirrors.  Starbursts reached a pinnacle in the 1940′s Hollywood Regency period & at the turn of the century when high-end auction houses started to get ecstatic bidders for these jewels. Mainstream companies took notice & began to reinterpret them. Starburst mirrors have been used extensively in design in the subsequent years. 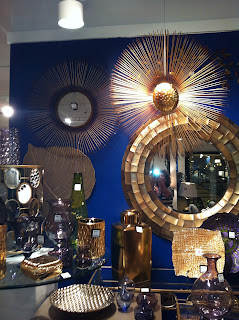 Most starburst mirrors are a meld of decoration & art ~ they add dimension, glitz, glamor & kinetic energy to a room & do what all mirrors do…bounce the light around a space. Some designers & interior stylists veer away from an item or trend when it becomes too mainstream, but since this style of mirror has been around in some form for centuries, I predict it will be so for many more. They work well in their most popular places ~ over a fireplace, bed or sofa… but also can be selected for more unexpected places in a home.

Now, over 200 years later, these mir­rors can still add an unex­pected pop to almost any room. 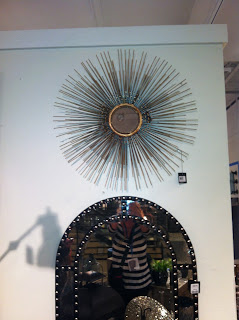 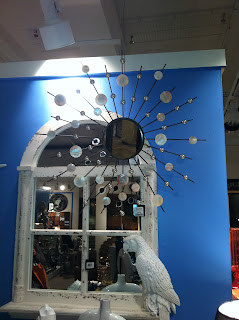 One Response to “Sunburst Mirrors Were Everywhere At Market”